This edition of Communication Arts Magazine notes the extremely fast growth of Muir Cornelius Moore during its first five years, and describes its diversity of services beyond adver- tising, including market research, print and exhibit design, corporate identity, public relations and publicity, point-of-sale and direct mail.

Muir Cornelius Moore is a ten-year-old advertising agency the bulk of whose work consists of sales promotion, direct marketing and corporate communications. "Initially, we went into areas of marketing communications where the competition was weakest." says Richard Moore, vice-chairman and chief creative director. "And while we may still handle the collateral for a client's existing advertising campaign, we find that more and more of our clients are asking us to handle their advertising as well."

It is this concern with the total communications effort, or, as Moore describes it, "seamless communication,” that has become the agency's specialty. When hired to produce sales promotion materials for IBM's debut in the personal computer market, for example, the agency readily adapted the Charlie Chaplin theme already established in the advertising. In the case of Owens-Corning, it was the Pink Panther theme that was carried over. "If you're going to do sales promotion," observes Bill Muir, chairman and chief executive officer, "you'd be foolish to ignore the creative investment of the advertising. What we do is push the inherited material-enhance the idea. Good communications shouldn't cause one to wonder, 'Which agency did that?’" 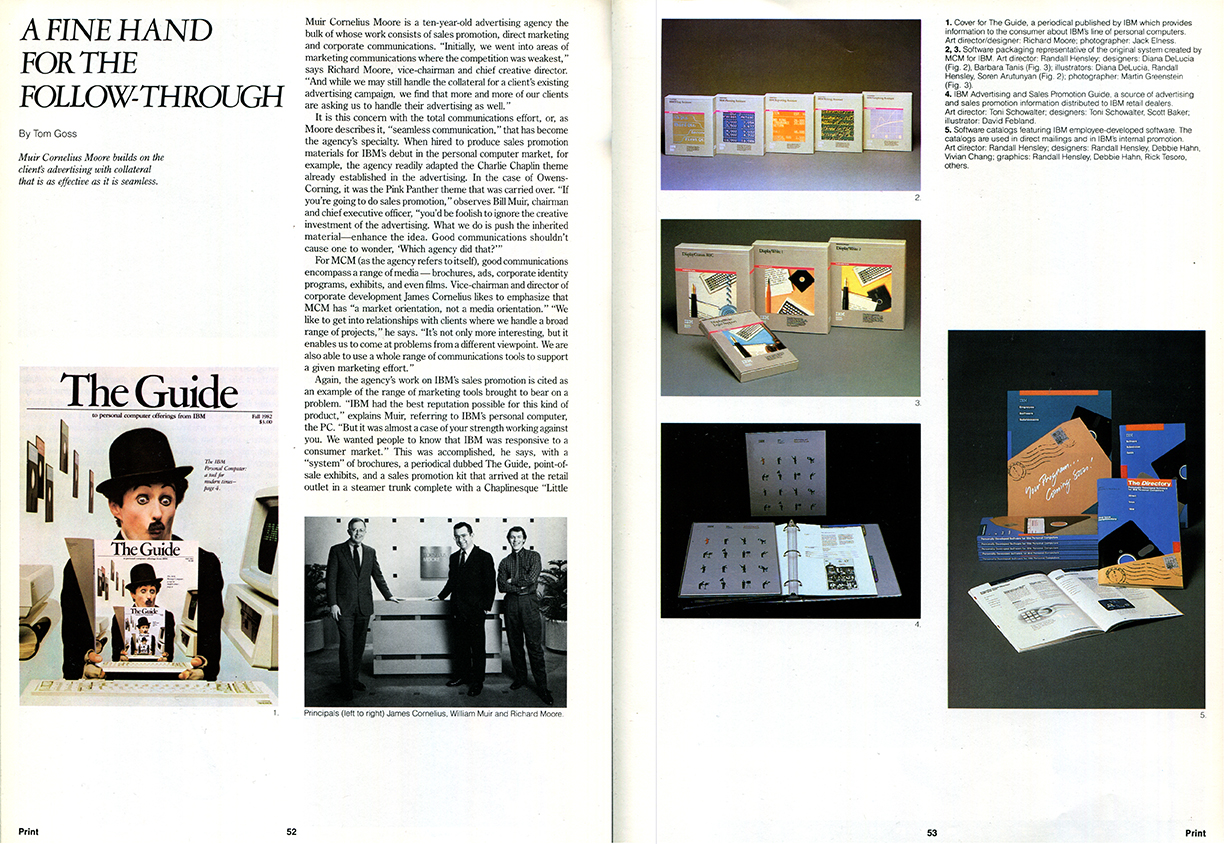 For MCM (as the agency refers to itself), good communications encompass a range of media - brochures, ads, corporate identity programs, exhibits, and even films. Vice-chairman and director of corporate development James Cornelius likes to emphasize that MCM has "a market orientation, not a media orientation." "We like to get into relationships with clients where we handle a broad range of projects," he says. “It's not only more interesting, but it enables us to come at problems from a different viewpoint. We are also able to use a whole range of communications tools to support a given marketing effort."

Again, the agency's work on IBM's sales promotion is cited as an example of the range of marketing tools brought to bear on a problem. "IBM had the best reputation possible for this kind of product," explains Muir, referring to IBM's personal computer, the PC. "But it was almost a case of your strength working against you. We wanted people to know that IBM was responsive to a consumer market." This was accomplished, he says, with a "system" of brochures, a periodical dubbed The Guide, point-of-sale exhibits, and a sales promotion kit that arrived at the retail outlet in a steamer trunk complete with a Chaplinesque “Little Tramp” costume and a red silk rose.

All three principals credit their "excellent team" for successes like the IBM program. “I think we apply more talent than has ever been applied to sales promotion,” Cornelius says. "We've been fortunate in being able to attract quality people."

Moore agrees. “And we don't hire easily," he adds. “We really shop around. Most of the people here come from diverse backgrounds-advertising, sales promotion, graphic design, and industrial design as well."

Like many designers who have risen to executive positions, Moore laments the fact that he is no longer able to work full-time as a designer, although he is firm about "looking at every project that goes through here at key points in its development." He does work directly on major and "not-so-major" projects if there is an opportunity to do innovative work. For the most part, however, his time is taken up with the "challenging and creative task of providing an environment where people can be creative." "If you can get the right creative people together with a clearly defined problem," he says, "you've won the battle. The important thing then is to get out of the way until an idea has jelled." 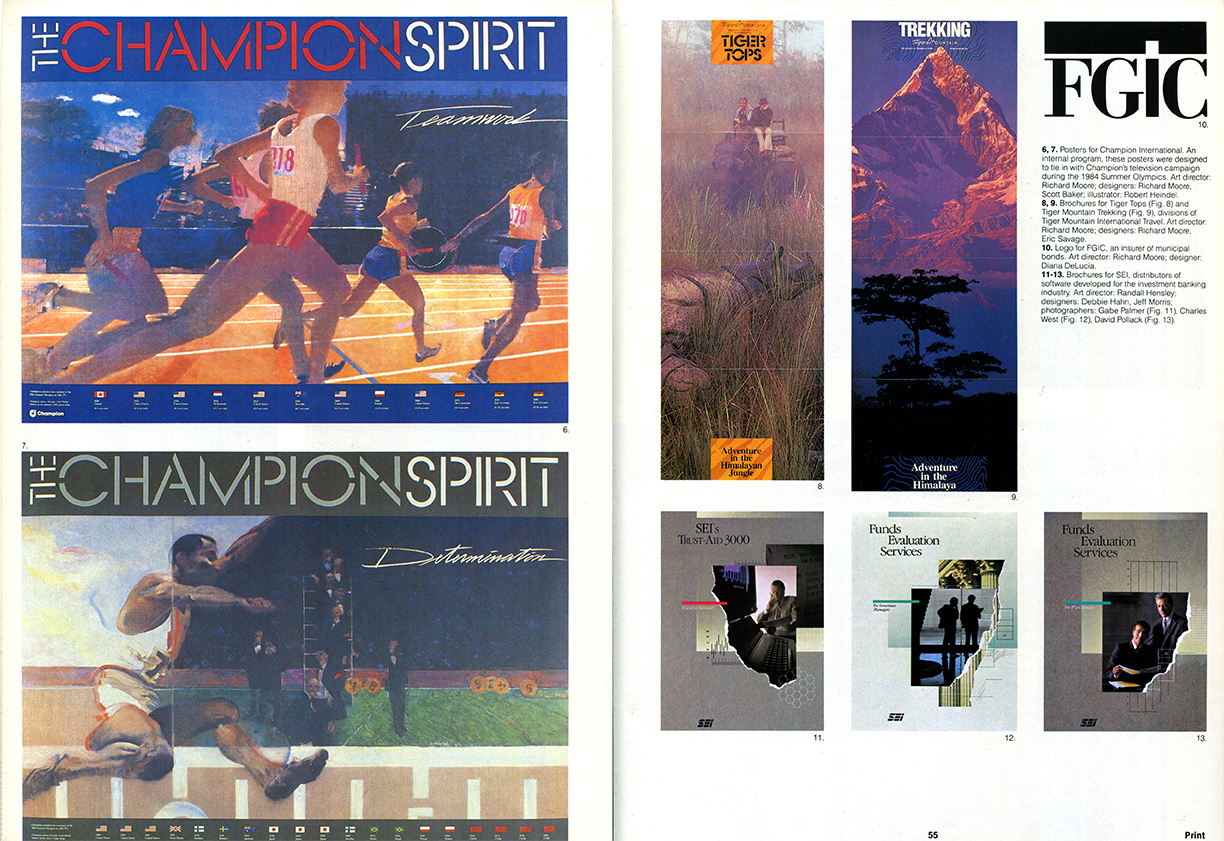 Moore's approach is one that operates at every level of the agency. Senior design director and vice-president Randall Hensley defines his role as "shaping a project conceptually and providing a framework for the designers." "It then becomes their project," he says. "They hunt down the art or hire the artists. I find I get their best work out of them that way.”

"There's a tendency in many agencies and design studios for a single personality to override even good work," he continues thoughtfully. "It's probably in the nature of design people. But it doesn't foster a creative environment. That's why I enjoy the atmosphere here—it's an open, positive environment.”
In spite of the agency's range of creative personalities, projects and clients (which include financial institutions, high-technology and industrial companies), there is a consistent character to the agency's output that cannot be attributed solely to its primarily corporate clientele. “I wouldn't call it an 'MCM look,'" Moore says. “I think what people perceive is our attitude. We have an obsession with quality, and we're young enough to want every job for our portfolio." To this end, he explains, the agency holds a semi-annual internal competition where all the work of the past six months is evaluated. “It's just like a national competition," Moore continues. "There's a jury and they select the best and worst work in each of four categories: marketing, design and art direction, writing, and production. We find that when we concentrate on both ends of the spectrum-point out what people are doing right and what they're doing wrong-the work in between tends to take care of itself. The overall quality is elevated." 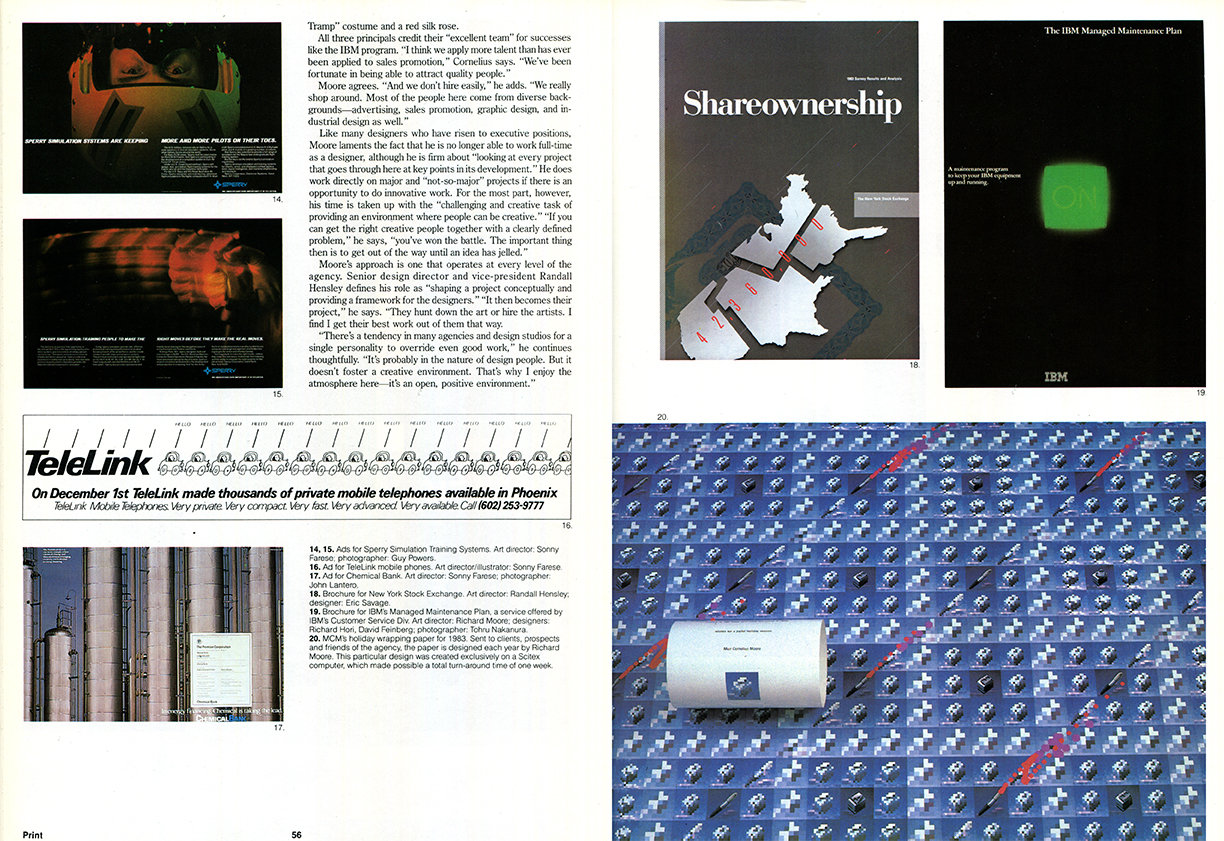 The success of MCM's approach to advertising and sales promotion is borne out in the agency's rapid growth since its incorporation in 1973. Starting out with the three principals-all of whom have extensive advertising and graphic design experience-the agency has since grown to employ over 125 people in its New York office, as well as to open a full-service office in Boca Raton, Florida. This growth has been fueled by annual billings that now amount to over $80 million, which the three principals would naturally like to see grow even larger: "We'd like to do more advertising and direct marketing work than we do," says Cornelius. "Right now, it runs about 25 per cent advertising, 25 per cent direct marketing and 40 per cent sales promotion, with the remaining 10 per cent coming from corporate identity programs and consulting work. Our objective is to continue to grow, but to manage that growth. You can't say that you'll grow to a certain size and that's it. You simply can't sit still." 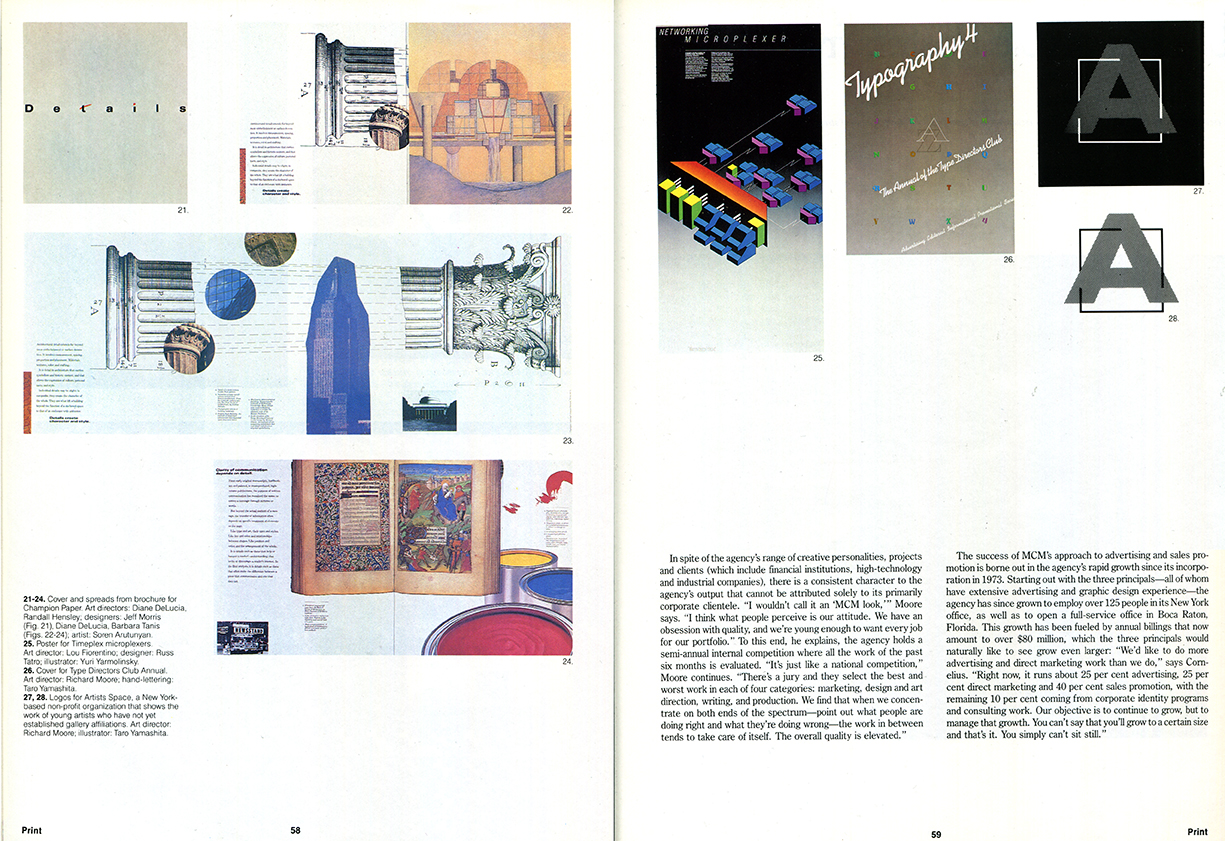